With the dry season on the way, travelers should begin thinking about their next Khao Sok jungle adventure!  We take adventures seriously at Khao Sok Riverside Cottages, and are always looking for new experiences to share with guests.  Therefore, we would like to tell you the story of our favorite Khao Sok jungle adventure to date.  That is, the trek to the old Chon Mining Area.  In brief, the adventure involves deep jungle camping, an abandoned tin mine in the mountains, towering waterfalls, and pristine nature.  We hope you’ll enjoy our story and consider making such an adventure the highlight of your next Khao Sok trip!

The outset of our Khao Sok jungle adventure


We met up at the Khao Sok Lake office in Takun, twelve kilometers outside of Cheow Larn Lake. There were eight of us in the group. Bodhi, Nick and I made up the ‘farang’ contingency. The Thai possé, meanwhile was made up of two Khao Sok guides, Et and Chai, and an old friend, Riit. The office provided the perfect place to unpack and repack rucksacks. When we had finished, everyone was carrying a roughly equal weight. Namely, about 40kg of rice, sugar, tins of curry and fish, water, clothes, rope and other gear. 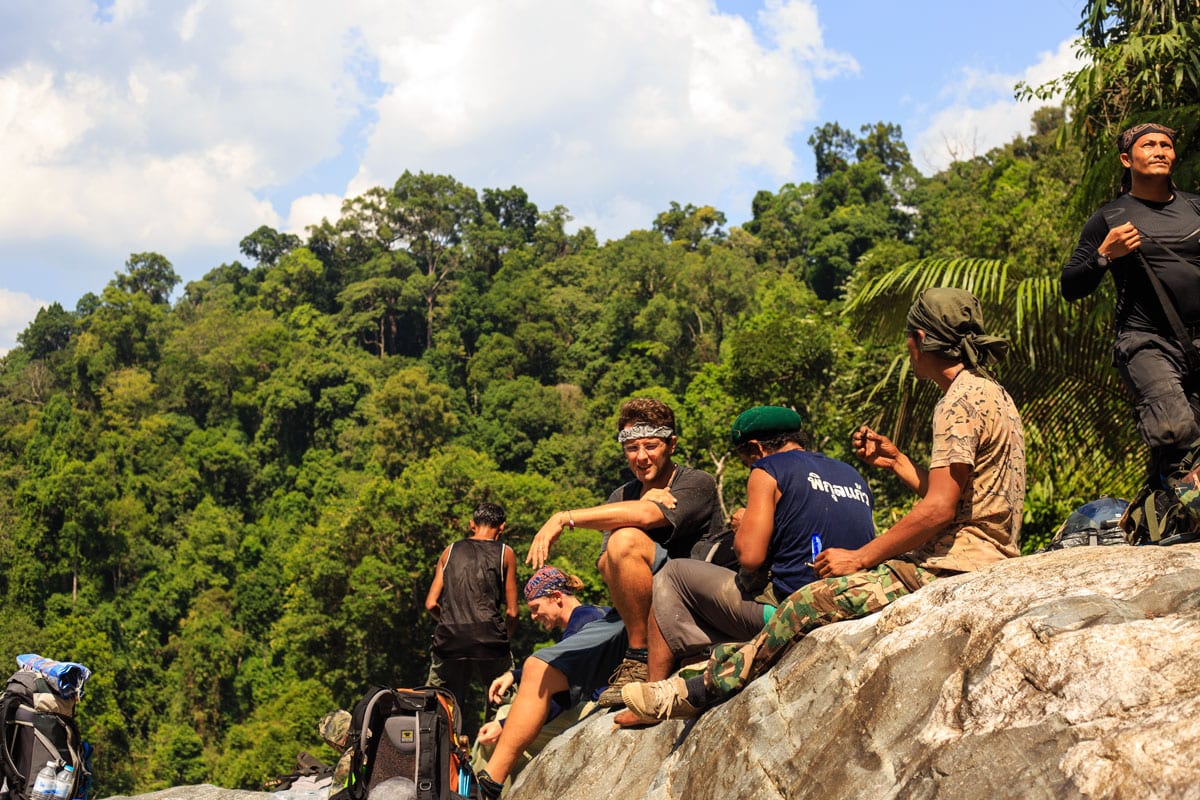 As we climbed into a pickup for the trip to the lake, I was already feeling butterflies in my stomach. This Khao Sok jungle adventure was daunting! We were looking at four nights and five days in the rainforest. We would leave civilization far behind, cross the continental divide, and walk all the way to the Ranong coastline. During our boat ride over the turquoise waters of Cheow Larn Lake, the feeling intensified. Even as we met our ranger escort, P’Grom and local guide, P’Dtuuk, I worried over the various things that could go wrong.

The second my feet touched soggy ground, however, all doubts, trepidation and fears vanished like smoke in the wind.

We had just begun our Khao Sok jungle adventure, and already the air was full with the sounds of nature. We began following a small river inland in a remote corner of the lake. The going was easy. Pebbled banks provided solid ground to walk on. Meanwhile, dry boulders sticking out of the water meant easy river crossings. As we walked, signs of civilization began to vanish, and quickly. Soon there were no more discarded bottles or campfire ashes to be seen anywhere. 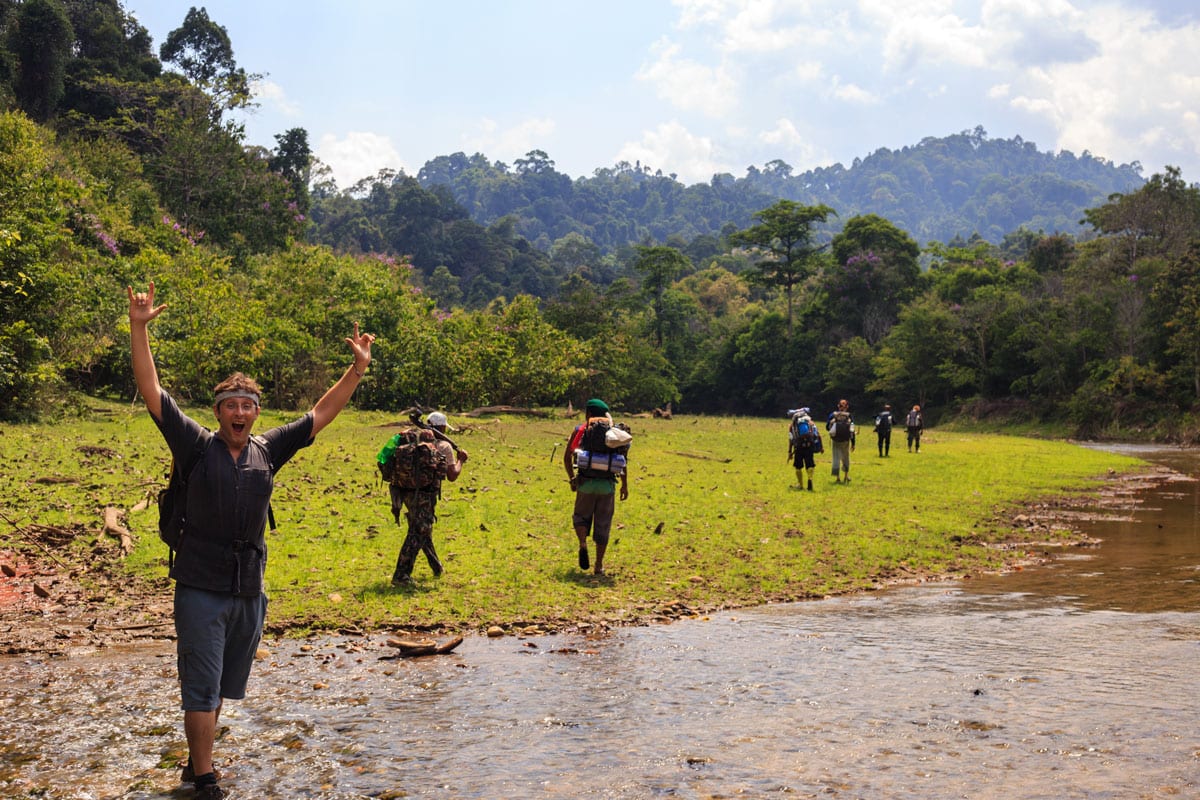 We followed the river for the rest of the day. As a result of the level terrain, the going remained easy. Soon we came to a broad, stony beach sprawled along a wide, lazy arc of the river. This would be our camp for the first night. The Thai guides immediately set to preparing shelter. They strung hammocks up between solid trees, and prepared rain covers and small domestic areas. The farang gang, on the contrary, set about swimming. Stripping down, we plunged into cool, clear water and floated there. Stress melted away like butter. Soon enough, however, all hammocks were prepared, and firewood was gathered. Then, an impromptu stone-skipping contest ushered in a delicious meal of fresh fish, fruit and vegetables. This was the only one of it’s kind that we would enjoy on this Khao Sok jungle adventure. 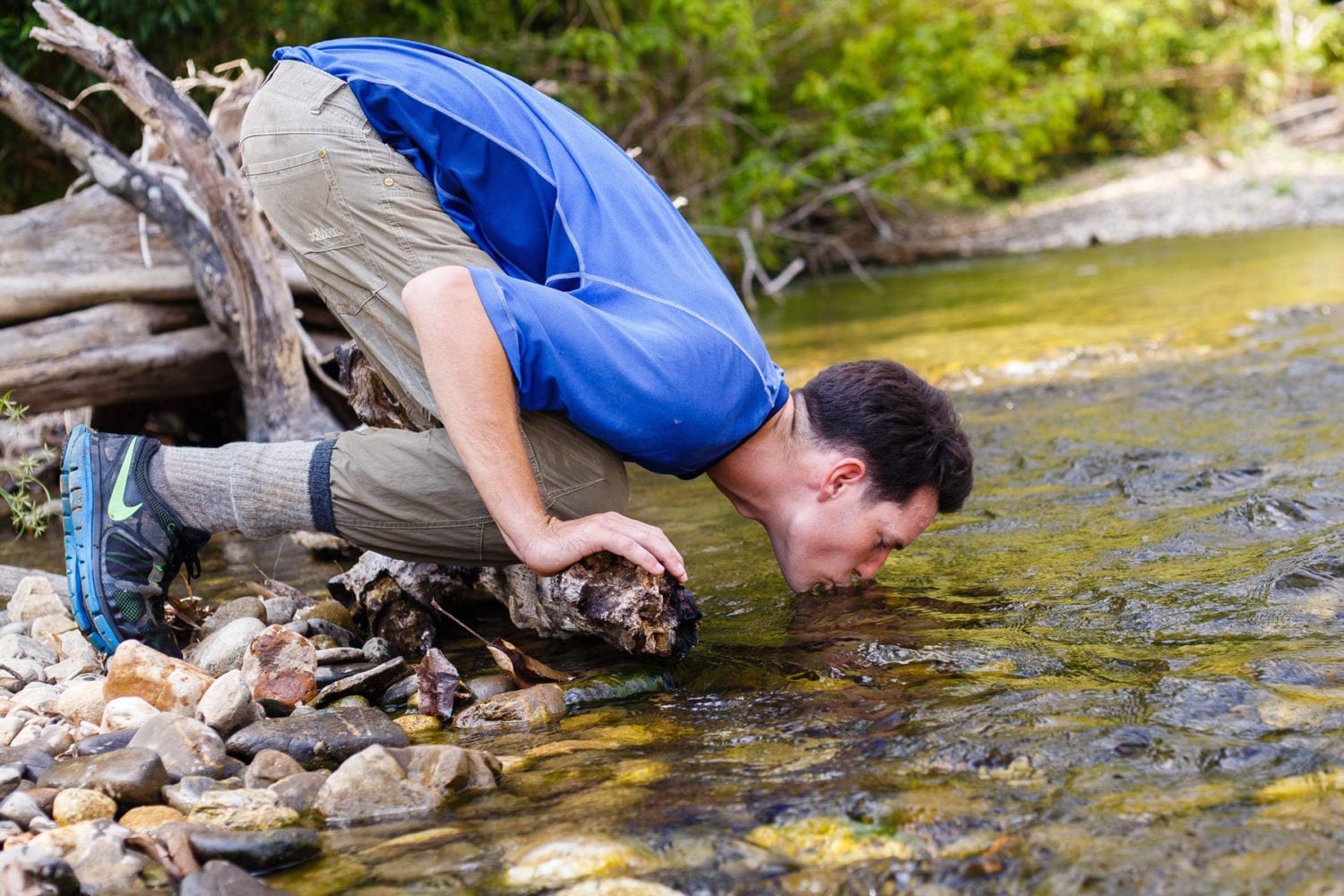 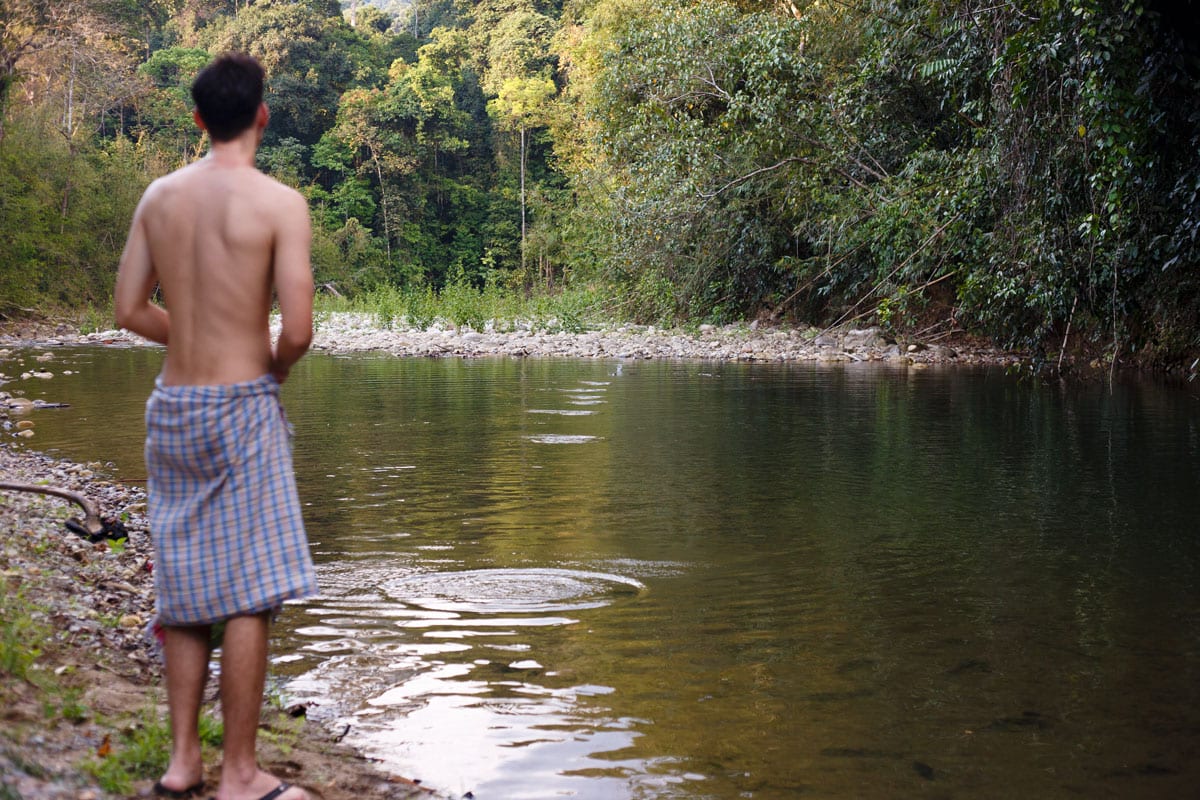 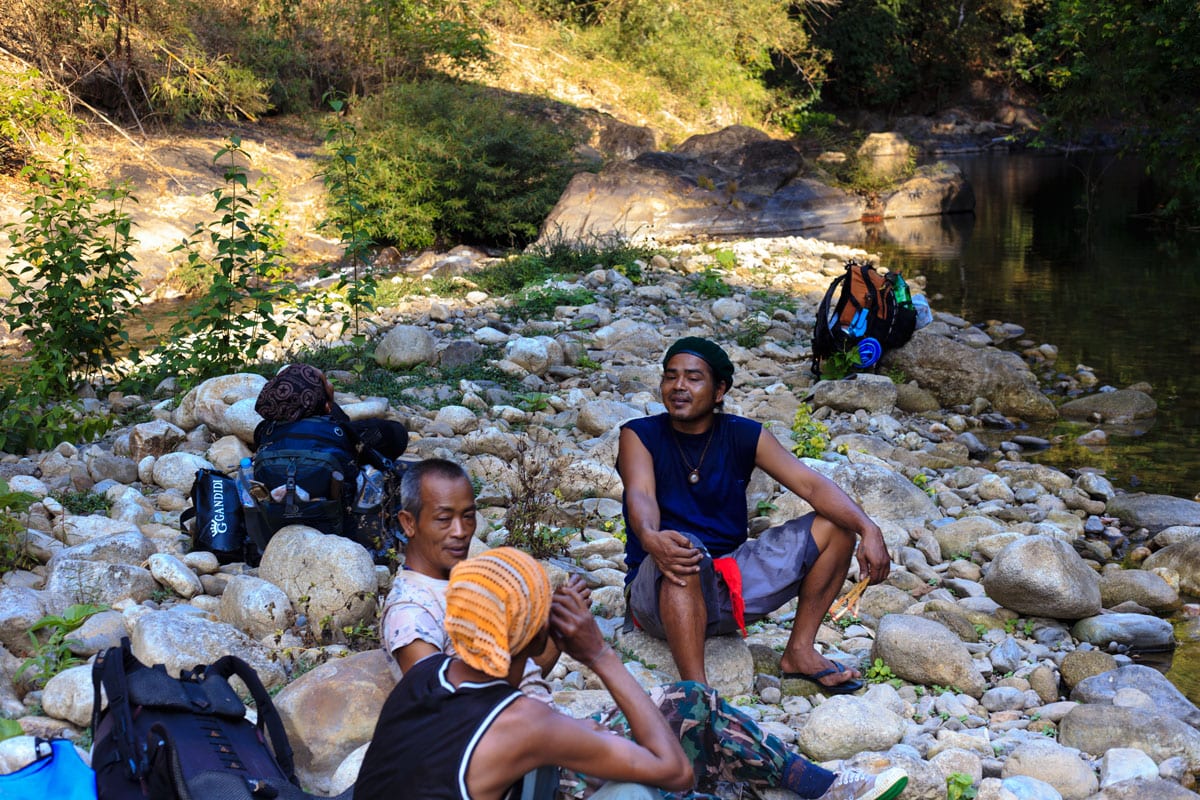 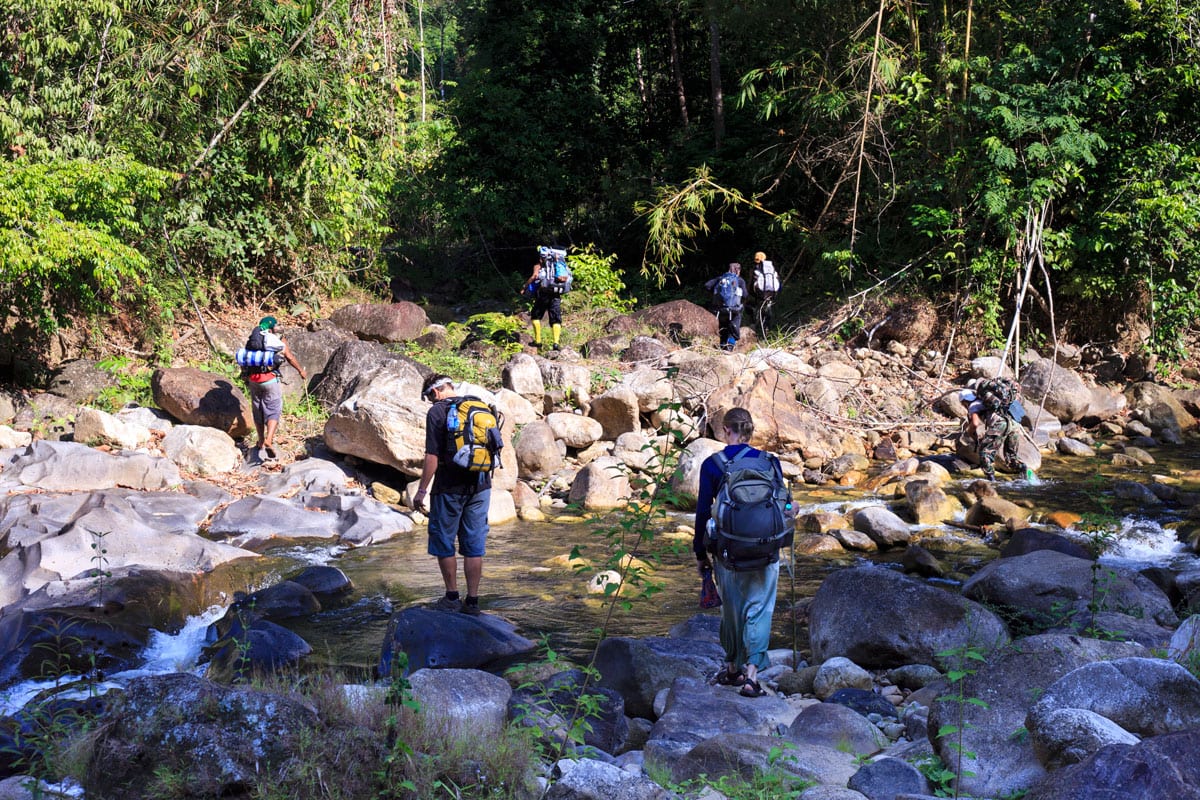 Bedtime comes early in the jungle, and rightfully so.  A wise jungle trekker doesn’t stumble about the jungle in the dark unless necessary.  Still, we lingered by the fire for a while after darkness fell, recounting favorite moments of the day, and marveling about what possibilities tomorrow held.

Dawn of the first full day of our Khao Sok jungle adventure broke in spectacular fashion. Rays of sunlight streaming through leaves overhead illuminated motes of dust and debris floating down from the canopy above. 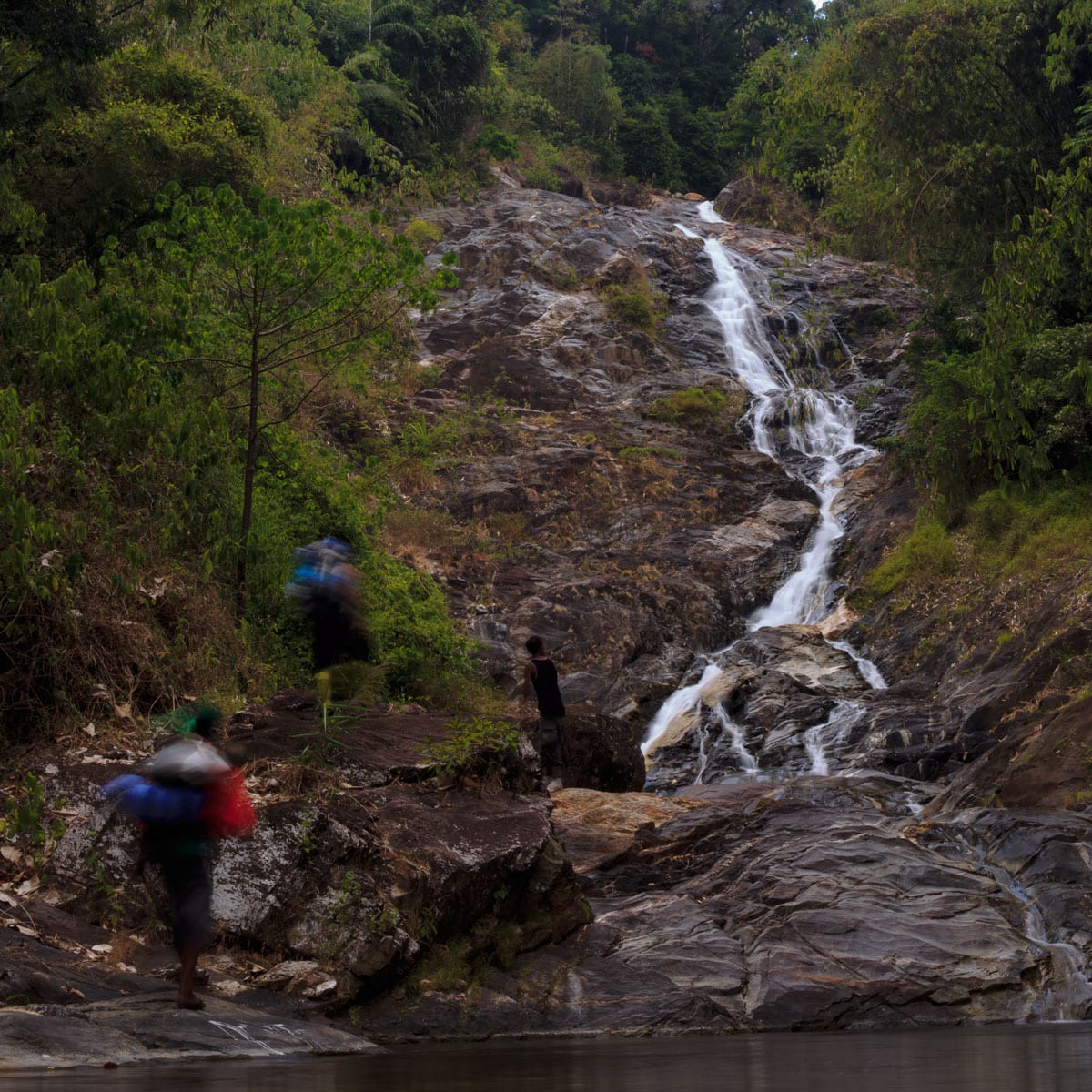 Bird song mingled with the chirping of insects, while a family of gibbons began its serenade from a tree nearby. Soon, we had boiled water on a revitalized campfire, and eaten the leftovers from dinner. Then, we were dressed, packed and ready to go. Finally, we scoured the campsite for any trace of litter, and were on our way.

Within a couple hours of leaving the campsite, the going shifted dramatically in difficulty. Specifically, it went from easy, to not-at-all easy. This abrupt change took the form of an impressive waterfall – the first of many. Our path up was straightforward, however. We were to climb bare rock, worn smooth by untold years of erosion. Hand- and footholds were plentiful as we climbed, helping negate the disadvantage of 30kg+ on our backs. As we climbed, each turn in the waterfall merely introduced us to a new section of waterfall. Eventually, the river’s course became too treacherous, and we left the water and ventured into the forest. 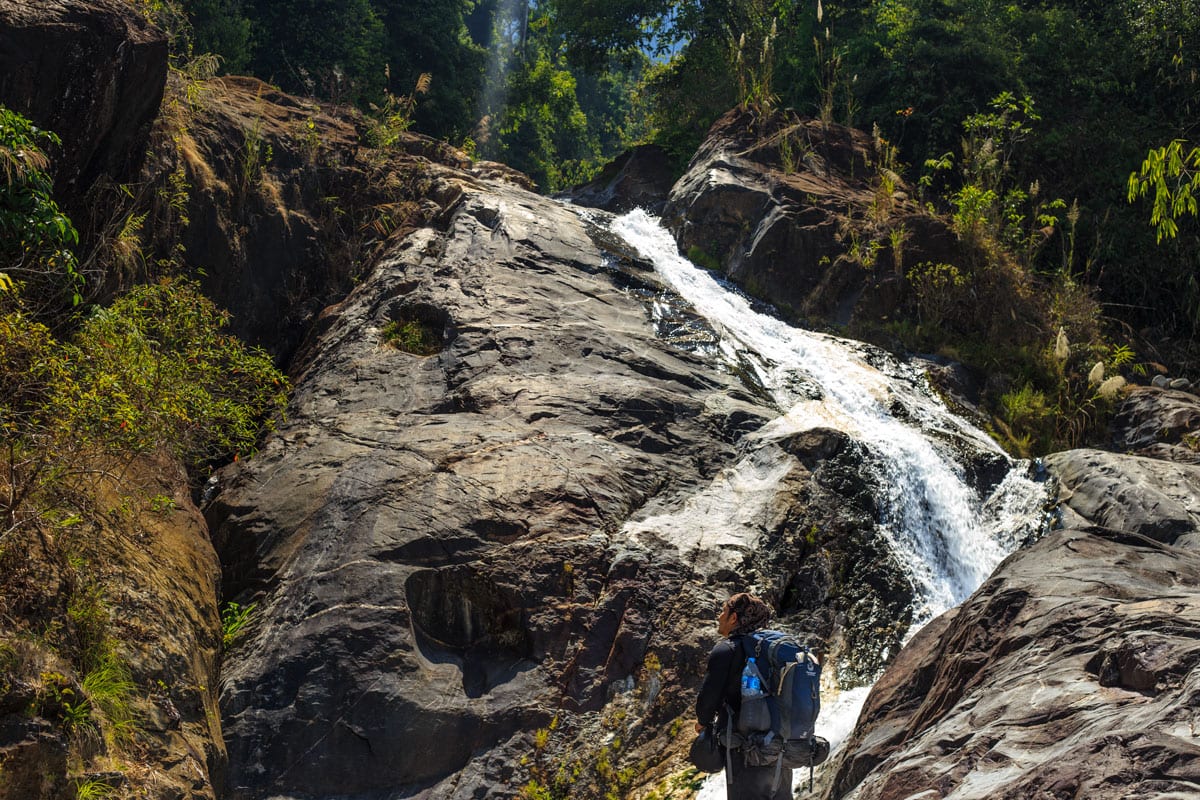 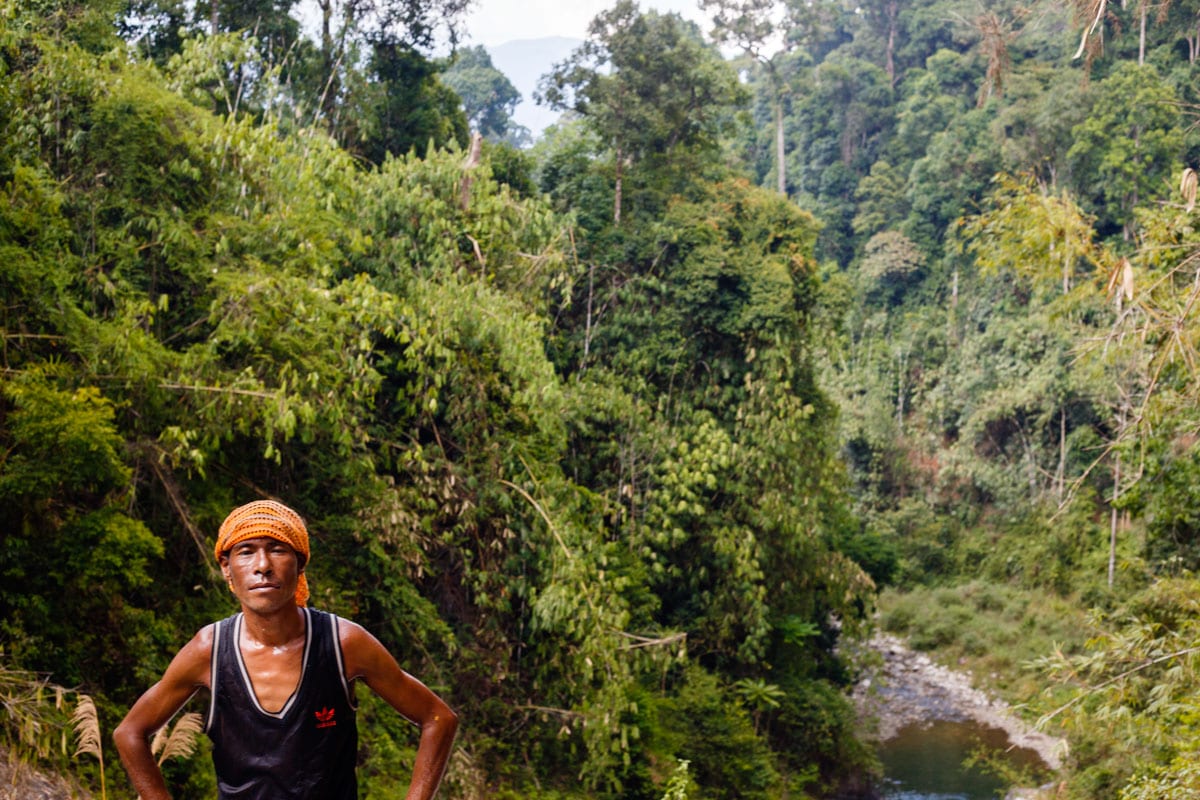 Our first taste of jungle

Our first steps into the dense, nearly claustrophobic atmosphere of the jungle shut out the sounds of water behind us.  Within four minutes, all traces of the day’s heat, blinding sunlight, and blue sky were gone.  The waterfall was only a memory, and the bare rock was blissfully easy to traverse in comparison.

Nevertheless, the jungle offered true marvels.  This was pristine forest, and it showed.  All around were signs of an intact ecosystem, and every surface seemed to be sprouting life.   Lichens, moss, orchids, and ferns were everywhere, and the air was suffused with calls of many-legged and winged critters.

Overhead, massive liana vines and rattan palms created a super highway in the canopy.  Every now and then we would wander into a patch of sweet smelling air.  This was the only terrestrial evidence of a tree in bloom somewhere above.

This first excursion into deep jungle supplied us with the first spectacular find of our Khao Sok jungle adventure.  It was a ‘Dton Sai,’ a strangler fig, apparently of an immense age.

Rather than one main trunk at ground level, this Dton Sai had five or six!  These radiated out and down from a central trunk high above.  They were like some sort of alien landing device beamed down from the mothership.  Indeed, the wood seemed to be formed from some alien material.  It was twisted and warped, like the tree was plastic and had been sat next to a fire to melt.  We could play hide-and-seek among the warped trunks of this beauty, all eight of us.  It was that immense.

Although we all would have been happy camping in and around that magical tree, we still had a ways to go.  We didn’t know it yet, but there were uncounted obstacles to tackle, and unseen beauty awaited discovery as we pressed onward and upward, deeper into the green depths. 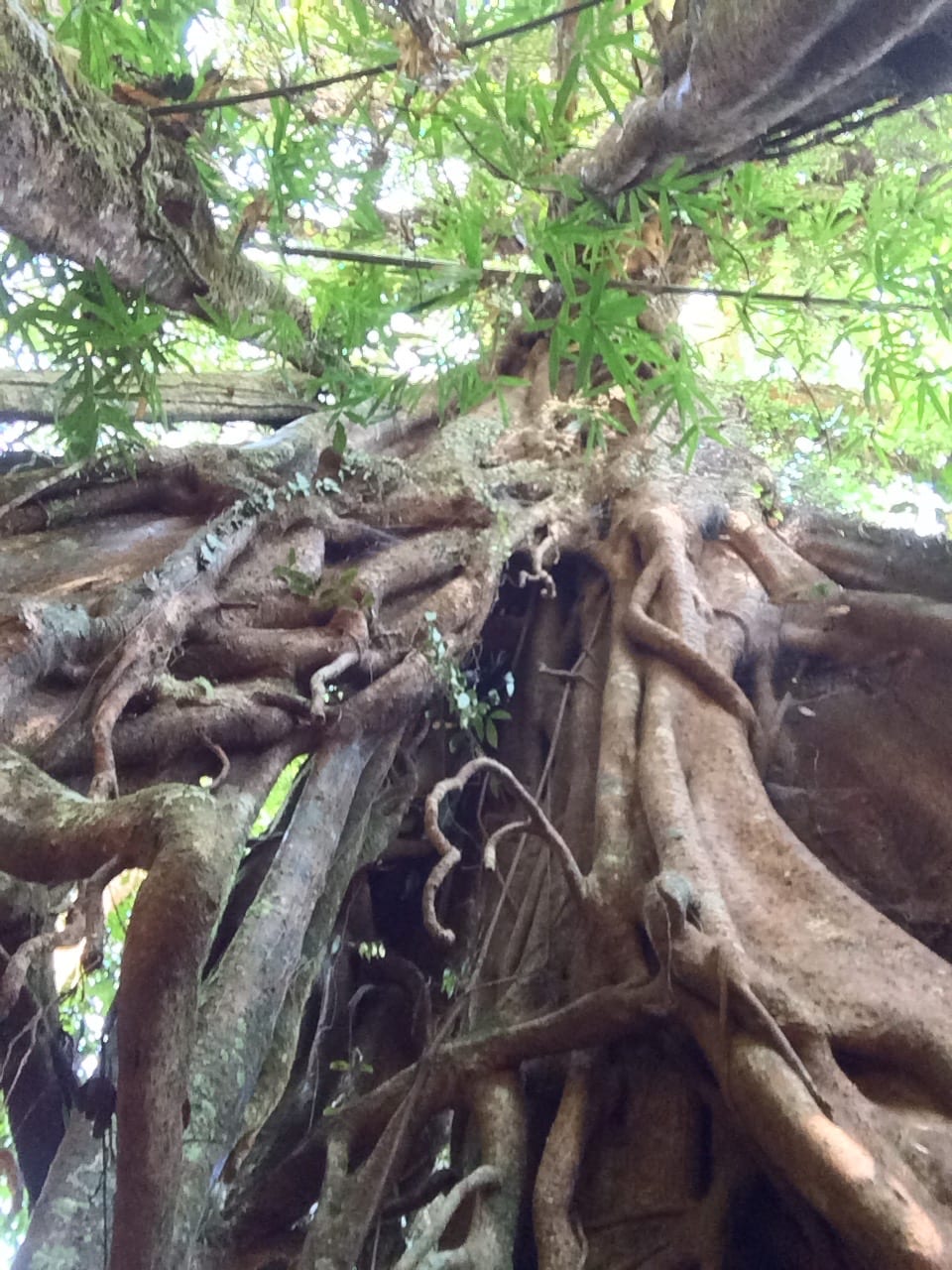 Are you looking for your own, unique Khao Sok jungle adventure?
If so, be sure to check out our other blogs,
like our Top 3 Khao Sok hikes, and our Top 6 Activities in Khao Sok National Park!

You can find the full activities list on Riverside Cottages website.
Once you’re here, our staff will make sure you make the most from your time!