What is Karst Topography?

The term “karst” refers to the structures created in limestone monoliths (large homogeneous bodies of specified rock type) by certain environmental conditions.  Karst is both a geologic term and a biologic term.  Geologists use it to focus on the physical aspect off the rock and the chemical conditions that created the rock.  Biologists use it to focus on the unique ecosystem created by the rock.  Karst topography produces dramatic landscapes. You will find a fine example at Khao Sok national park.

Karsts (to a geologist) are characterized by holes, lots of holes.  Fractures along which water can drip, drip, drip.  Small holes can become hollowed out into giant caverns by the dissolving action of water. We see little pockets on the surface, and riffles and crevices.  All these features are the result of the unique chemical interaction of limestone and water.  Limestone is composed of the chemical compound Calcium Carbonate (CaCO3), which forms the minerals Aragonite and Calcite. Tthese are known as polymorphs – they have the same chemical composition, but different crystalline structure. Water, when it is weakly acidic, reacts with Calcium Carbonate to produce Carbon Dioxide gas (CO2) as well as dissolving the rock.  This of course creates holes in the rock! 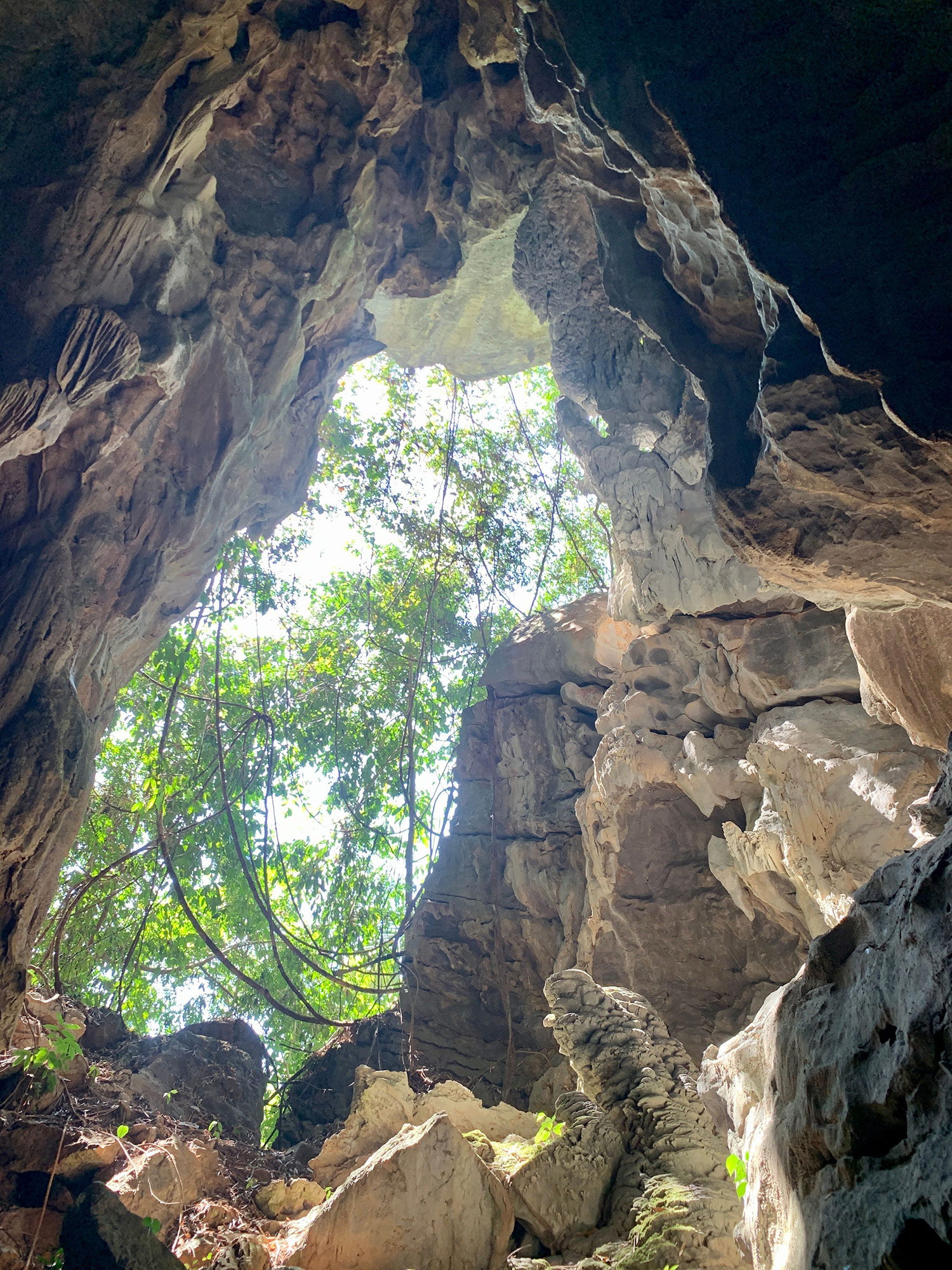 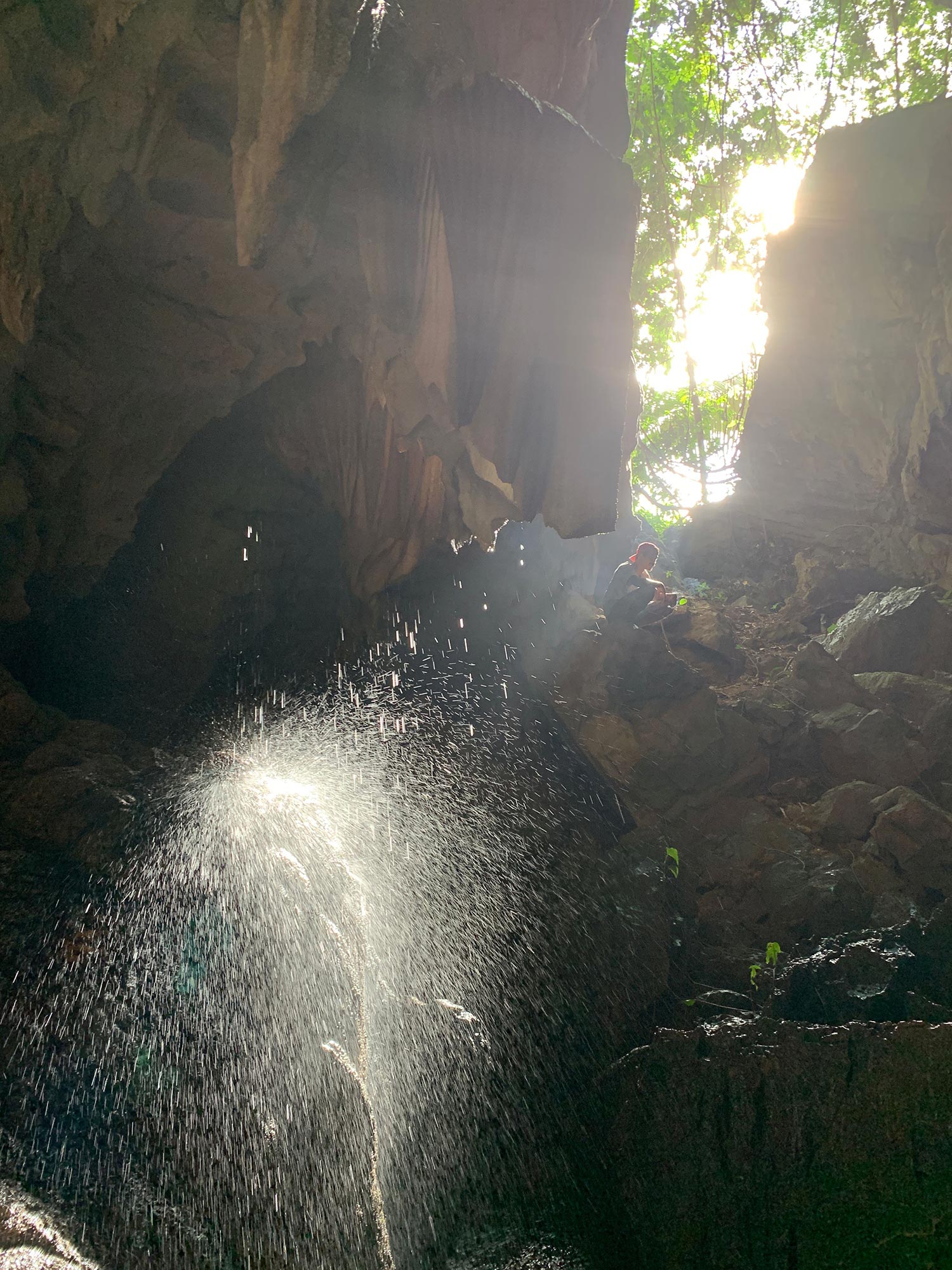 The Importance of Water

Besides dissolving limestone, water also builds new formations using the dissolved minerals. These are primarily Calcium Carbonate, but we also find other minerals in much smaller quantities. The water now moves through the limestone along pre-existing fractures. As it proceeds, minerals which were dissolved in the water along the way, are deposited. When it exits the rock, say by dripping from a cave ceiling onto the floor, it again deposits dissolved minerals as it is hanging, ready to fall, and again when it reaches the ground.  This action produces the famous stalactites (which hang down) and stalagmites (which stick up). We see a phenomenal array of flow formations “flowing” from the rock face.  These range from massive boogers of limestone hanging from overhung cliff faces to exquisite crystalline waterfalls in pristine cave environments.

The Biology of Karsts

From a biological perspective, karsts face several environmental challenges. Extremely limited (often non-existent) soil and acidic water, when there is water. Also desiccating conditions exist the rest of the time.  And these are just the challenges on the surface!  The environmental challenges deep in a cave are even more difficult. Soil is even scarcer and nutrients are extremely limited in quantity and variety (usually solely derived from bat guano). The water level can swing from raging floods to months of dryness. There is very little nutrient exchange with the outside world, and of course there is pure, unadulterated absolute blackness.  (Actually, adulteration does occasionally occur via the headlamps of spelunkers, and they bring in outside nutrients as well…be careful while you are exploring!)

The net result is that karst colonizers quickly evolve unique adaptations to thrive in this harsh environment.  This means speciation (the creation of new species due to evolutionary adaptations)! For example, in one study, biologists surveyed a karst for 30 months, looking for new species.  At the end of the survey, they were still finding new species. In fact the predicted number of new species was continuing to rise.  You may think of Thailand’s karsts as islands in seas of rain forest. This geographic isolation of karsts from similar environments produces another biologic phenomenon: endemism (species that are only found in one specific region). For example, a cave fish that evolves in isolation has little ability to interbreed with the cave fish in a nearby karst.  Karsts are famous for having species which are ONLY found in one cave on the entire planet! 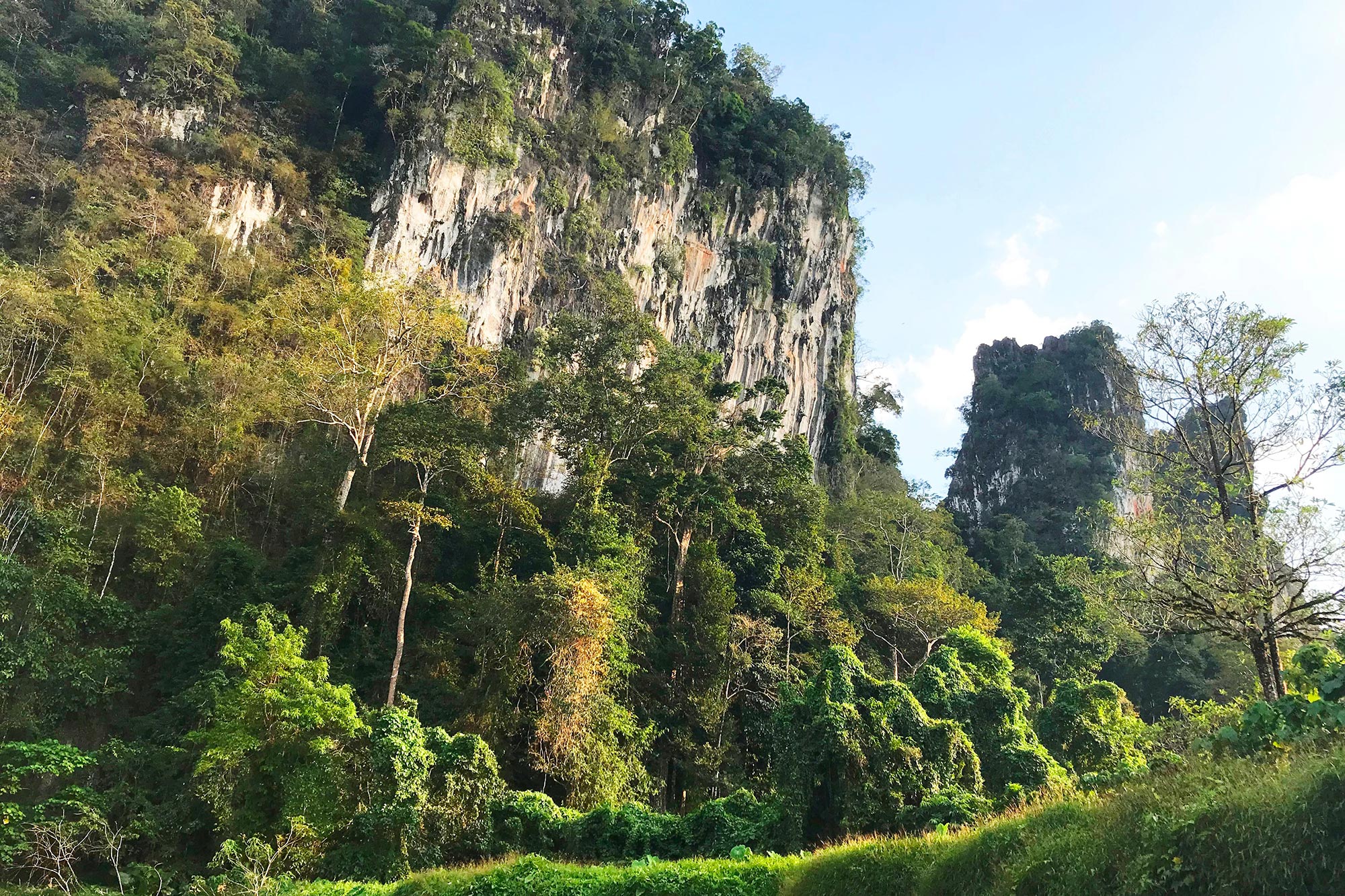 The Landscape of Karst Topography

Karst isolation is a result of the tectonic forces which brought the limestone to the surface.  It results in the dramatic landscape of karst topography that we see today. Limestone is brittle, so as it was uplifted (pushed towards the surface from deep below the crust), it cracked and fractured.  Erosion acts preferentially on pre-existing weak spots, such as fractures. So the cracks expanded, meaning the remaining limestone grew further and further apart, until it became the disparate karst towers we see dominating the horizon today.

While the rocks and minerals (or lack thereof) of karsts greatly influence the colonizing biota, the plants which do succeed in this environment exert a strong influence on the nature of the rock as well.  As plants grow, the roots push their way into the minutest cracks in the rock, searching for water and nutrients.  This action slowly but surely pries apart the cracks.  This can dramatically alter a cliff face, as when a massive chunk of limestone calves off the face due to tree roots forcibly separating it.  The decaying vegetation of plant life also has a strong effect.  Water passing through layers of plant detritus becomes acidified, making it a much more potent dissolver of limestone. 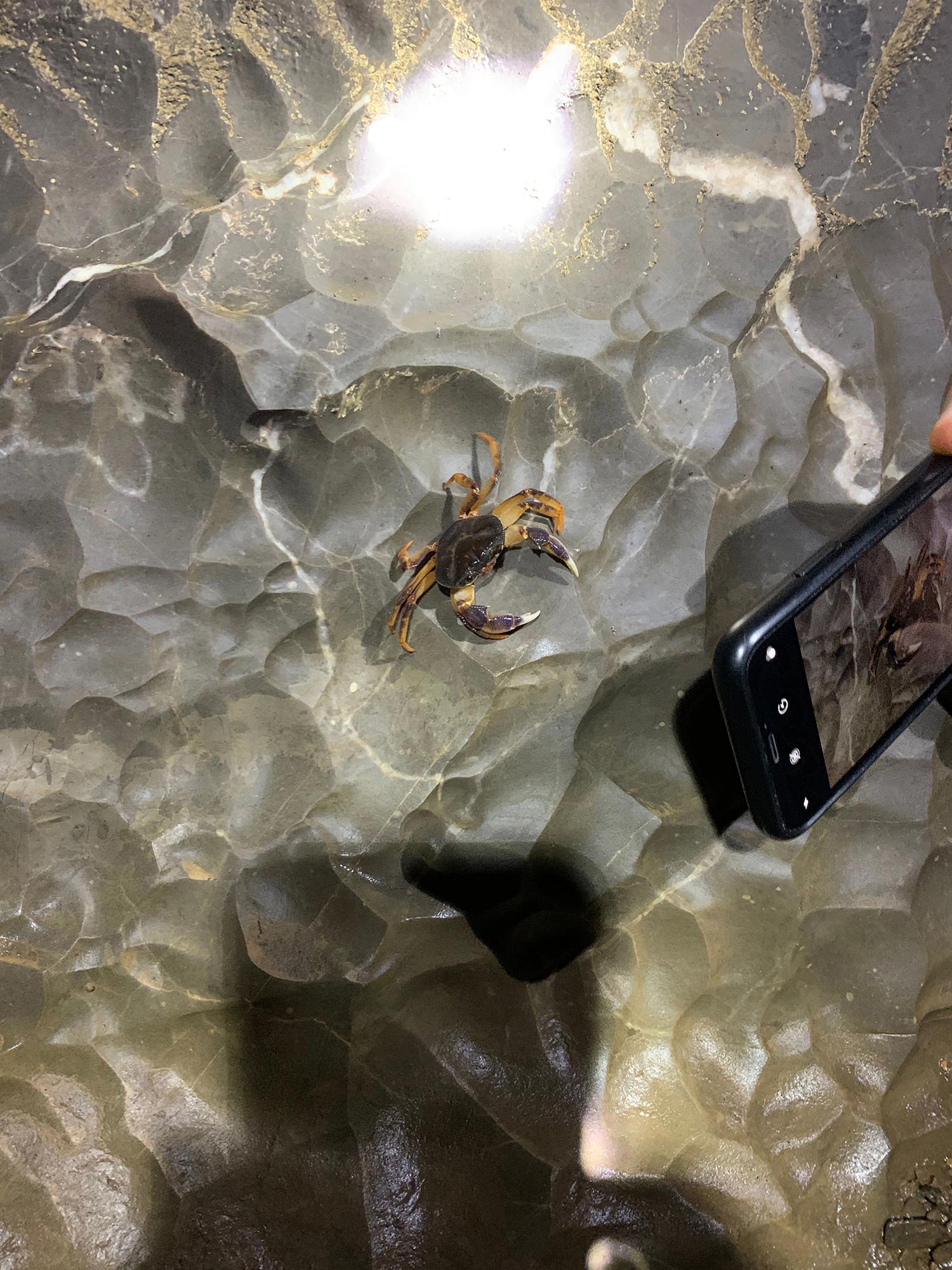 The food chain of a karst cave is remarkably simple in comparison to the absurd intricacy of its rain forest neighbor.  In the absence of soil, the base nutrient is guano, an extremely rich source of nitrogen. Bacterial molds grow on the guano, which in turn feed the ubiquitous cave cricket. Cave centipedes and WhipTail Spiders prey on the crickets. The bats which produce the guano rely on the outside world for their nutrition, in the form of insects or fruit.  In so doing, they introduce an outside source of nutrients into the otherwise limited cave nutrient system.

Cave critters evolve their own unique traits to thrive in the limitations of a cave.  The typical process involves a fish, or cricket, or centipede, or crayfish crawling into a cave from the outside world.  Over time, it responds to the darkness by losing pigmentation and eyesight. At the same time evolving extremely sensitive feeling appendages to replace sight with touch. 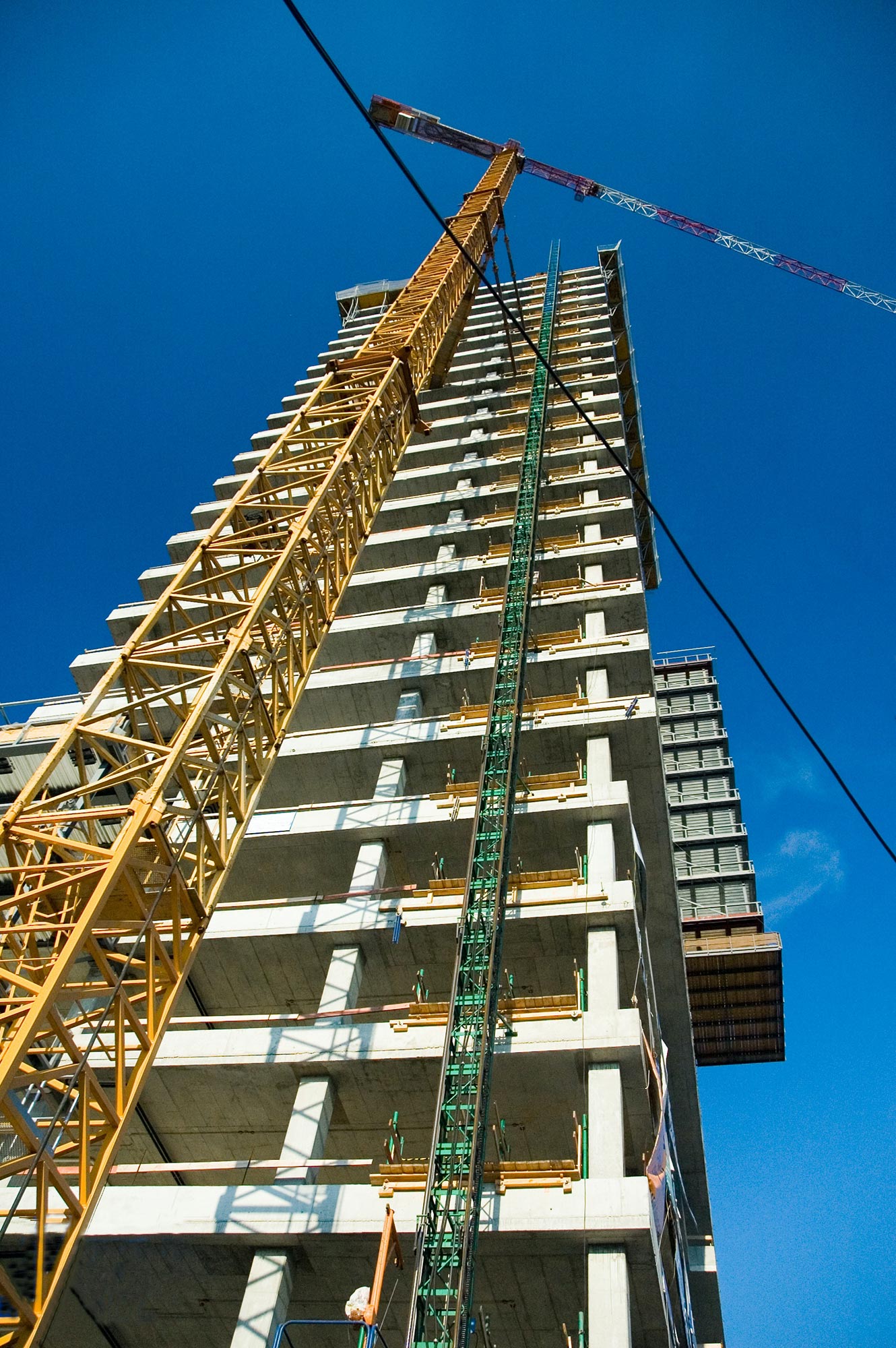 Like every other ecosystem on our planet, karsts face their own unique threat from human activity. In this case derived from a strange twist of well-meaning environmental regulation intertwining with the chemical composition of limestone.

In the year 1988, in response to the catastrophic deforestation of Thailand by short-term profit oriented logging operations, the Kingdom of Thailand issued an absolute ban on all logging operations.  History, as it so often does, responded unexpectedly.  Faced with a shortage in building materials, the Thai construction industry switched from timber to concrete.  Limestone, with a relatively high magnesium content, is a critical component of concrete.  The karsts of Thailand have sufficiently high magnesium contents to be suitable for concrete production. This is due to a process known as dolomitization (dolomite is a magnesium rich form of calcium carbonate).  Blaaaaaaaaaaaaaaam! The dynamiting began in earnest almost immediately. Since then, man has destroyed countless karst formations and turned them into concrete buildings.

Besides the loss of biodiversity and endemic species, karst destruction results in a very real deleterious effect on surrounding human communities.  Karsts act as vast reservoirs of rainwater, holding the water in the fractures, holes and caverns within.  Karsts release the water over time, for example in the form of a river issuing from the mouth of a cave.  This provides two valuable ecosystem services. One, it soaks up excess rainwater to prevent flooding. Secondly, it releases a steady supply of water year-round, helping mitigate droughts. Of course, dynamiting karsts for concrete production removes these ecosystem services and results in hardship for the surrounding communities. 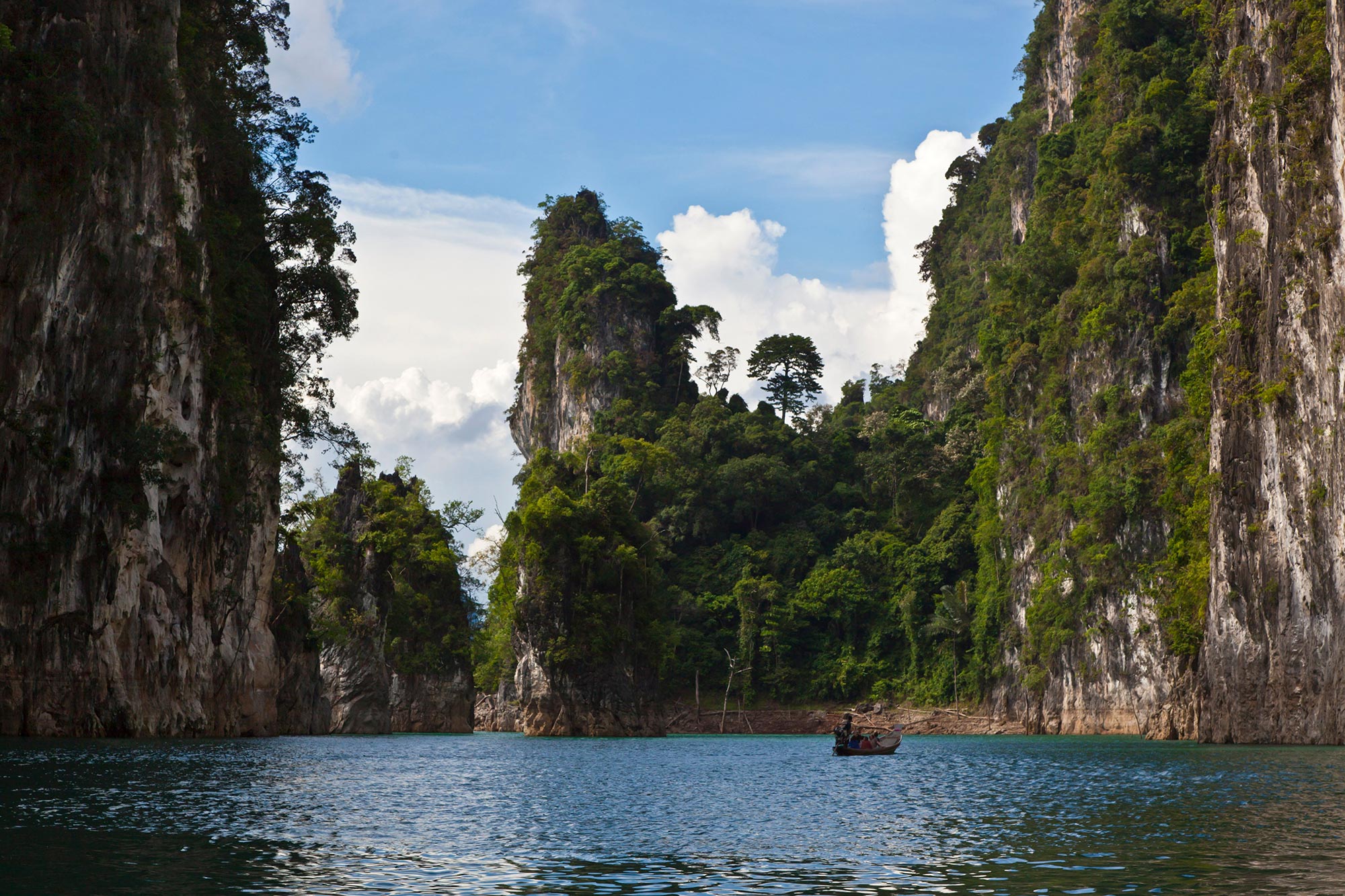 September 19th, 2022|Categories: Everything Else|Comments Off on What is Karst Topography?